I’d like to introduce you to five of my pictures, each of them accompanied with a short text. They are not necessarily my best photos but I’ve chosen them because I find them interesting. To be honest, I’m not quite sure that I would be able to pick five best photos of mine because I try to keep improving and that makes me look at my old shots in a different light. 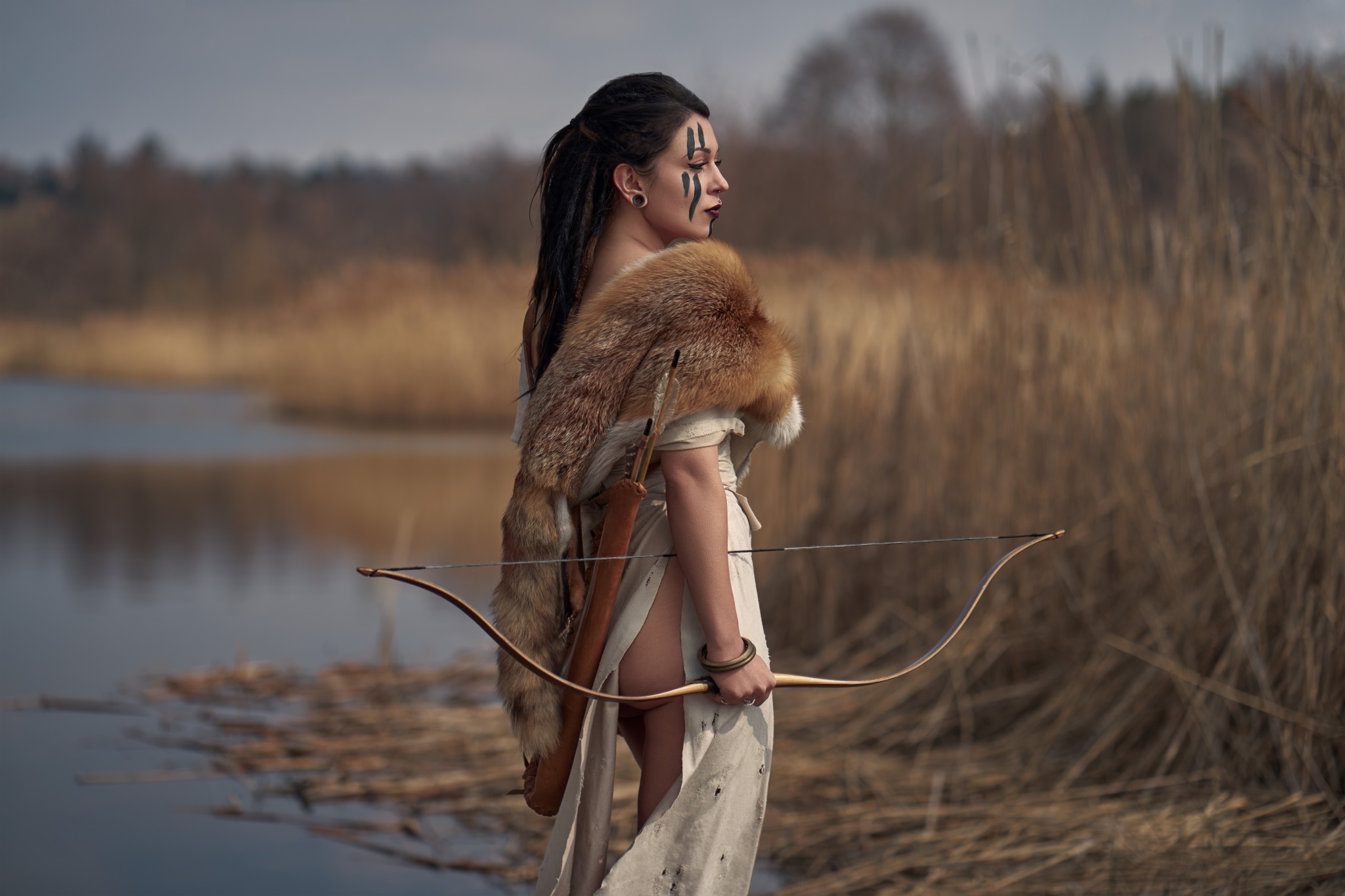 I wanted to give a go to something different than just fairies and typical good lookers I photograph most of the time. When I came across a model with dreadlocks and also interesting features, it didn’t take too much thinking for me to come up with the whole idea. The aim was to create a scene with a fantasy warrior. I borrowed a bow and a quiver, made a skirt out of a piece of fabric, tied up a strip of cloth as a top, wrapped fur around the model’s chest, and put a bracelet on her wrist (which would be impractical in reality). The model made a war pattern on her face using a body paint. It was early spring and everything was gloomy, so I chose a pond with dry reeds as the location to make it look like it’s a warrior on a hunt in a lake area. That day was pretty windy, there was a sunshine for a while and the next moment the clouds cast a shadow. The picture was taken just as the sun shone through the clouds, which brought a spark to the photo. At the same time, the higher contrast between the light and the shadow gave the model a tougher look – this suited the photo more than if it was illuminated by a soft and gentle light. 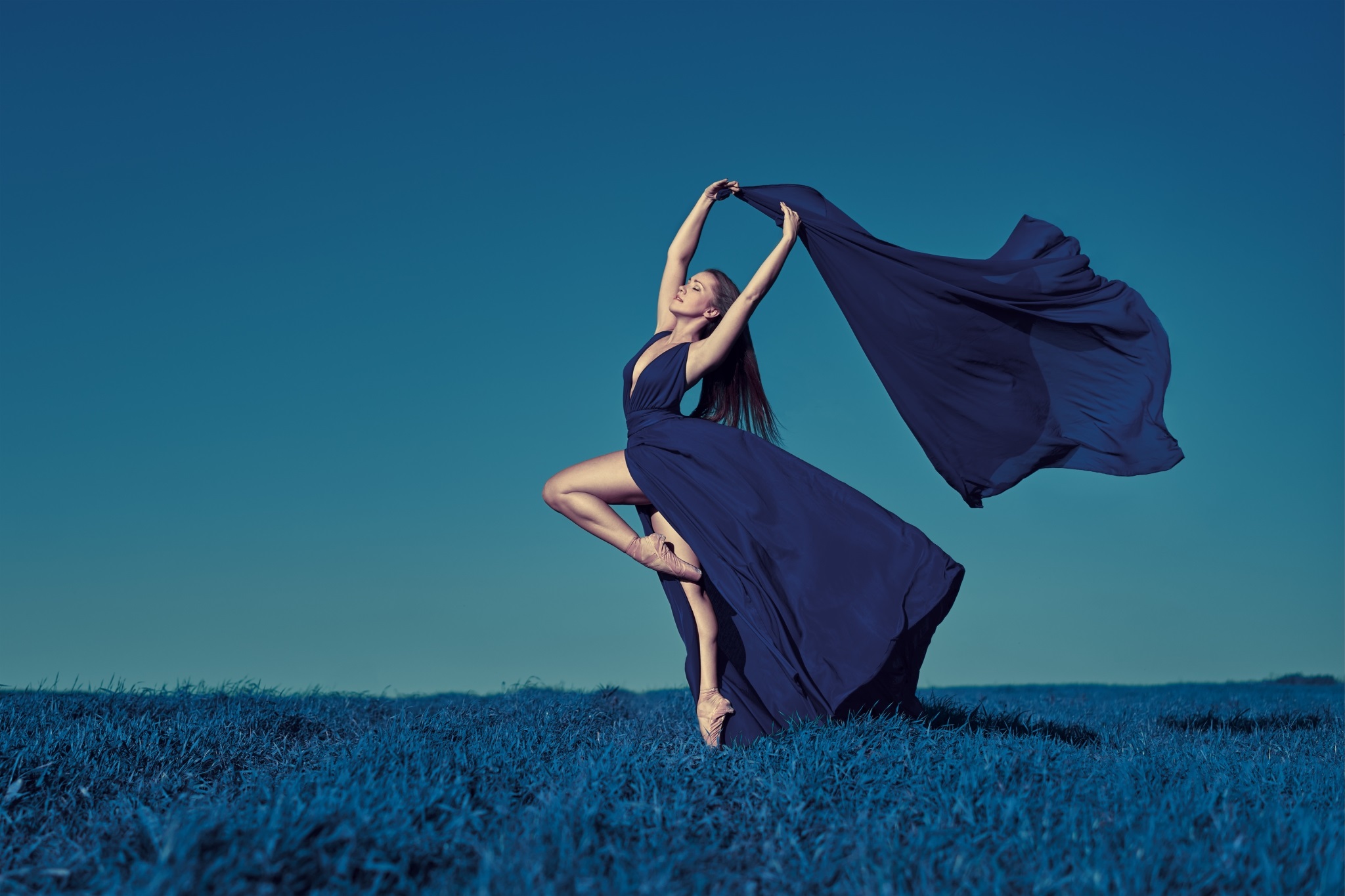 I like to play with fabrics and to let them fly in my photos. It adds dynamism to the photo, even though the ballerina would make this one dynamic anyway. It’s always a pleasure to work with physically gifted people. It’s easier to make interesting photos with them. I wanted to make the picture as simple as possible, in order to highlight the grace of movement of the ballerina. That’s why I chose a grassy airport which is slightly uphill and with the horizon opening beyond it. I laid down on the ground and shot from below, so that the horizon was as low as possible and the ballerina stood out nicely against the sky. The shooting took place late in the afternoon and the sun was quite low. This more or less created hard front lighting, which was convenient as it helped me avoid distracting shadows on the skirt and the piece of fabric. In the postproduction phase, I also created a more natural version with green grass but in the end both the ballerina and I preferred this blue version. 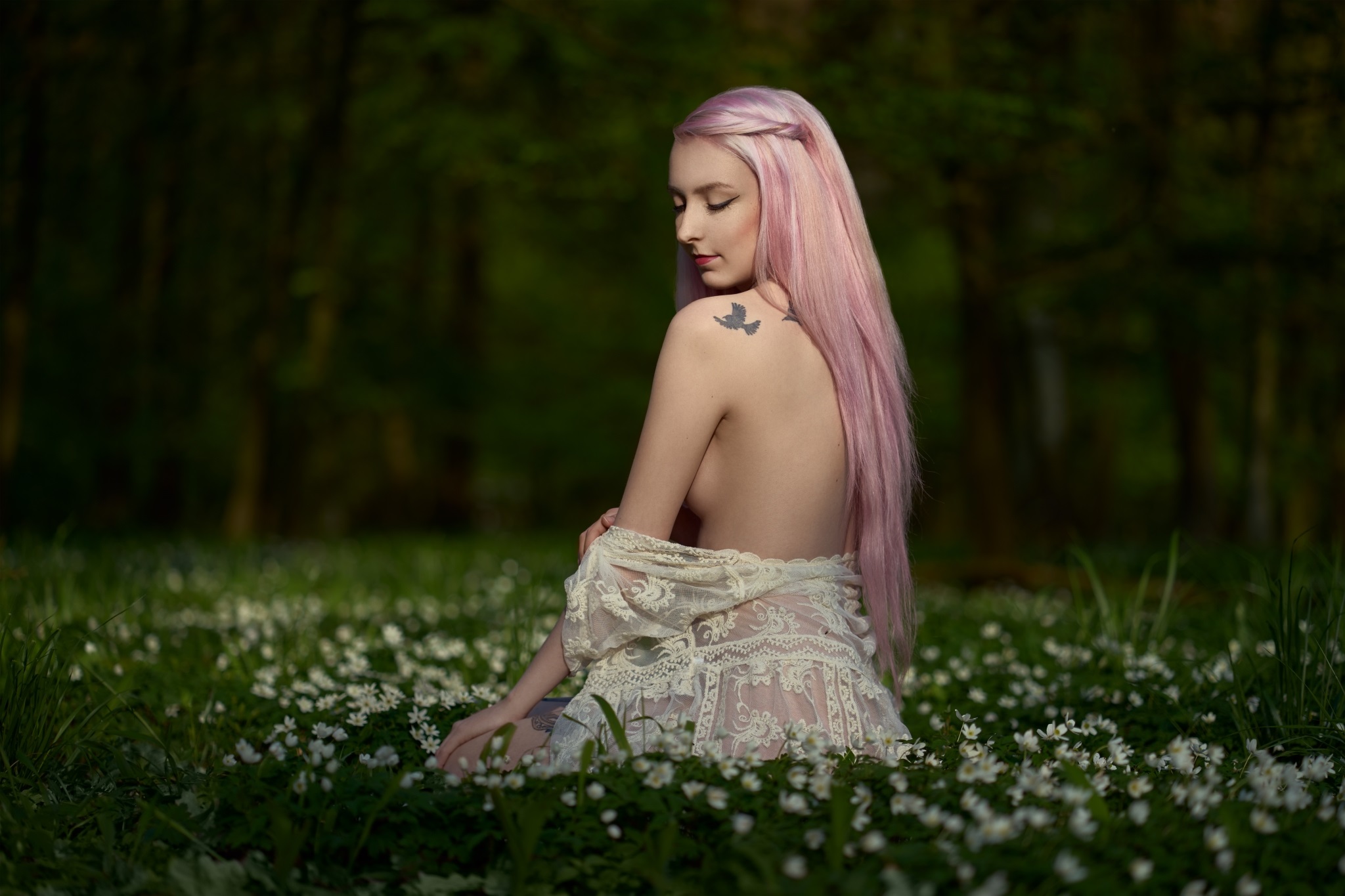 I call this model a fairy-type girl, so I decided to rely on what works and took her to a deciduous forest where windflowers bloom beautifully in spring. We found a place where the sun shone through the trees. It illuminated the model as well as the windflowers very nicely. The model is illuminated by the sun and everything else is in the shadow and therefore darker. Thanks to that, the model attracts attention as she is in the brightest part of the photo. At the same time, the light creates a dreamy and magical atmosphere of a mysterious forest where there’s a windflower fairy sunbathing in a grassy clearing. 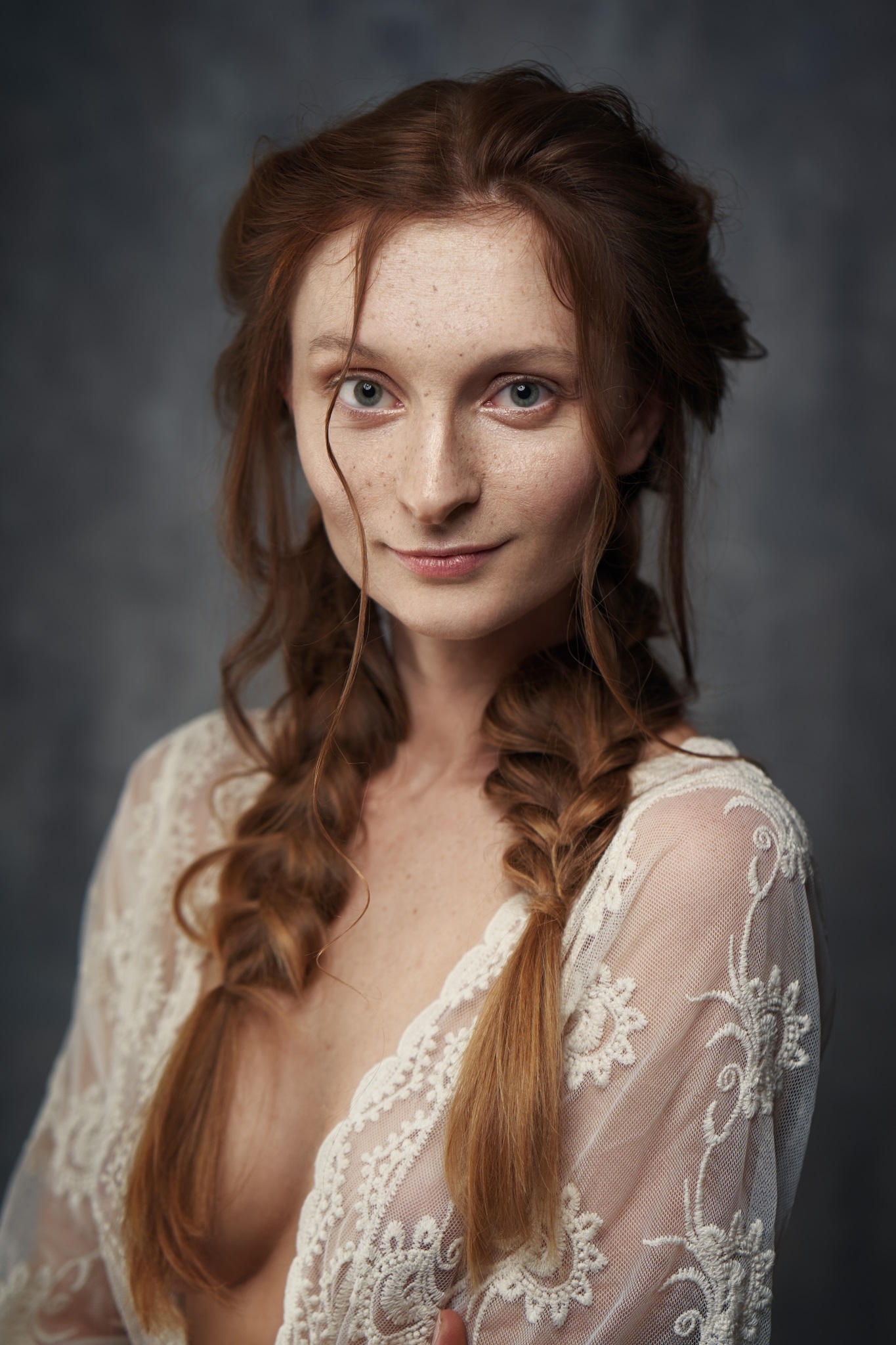 This room portrait was created in cooperation with make-up artist E. M. Visage - Eva Mihulková. Eva gave the model natural makeup, highlighted freckles and also did her hair. The aim was to create a romantic or even pictorial look and to capture the charm of the model. I used a strobe light with a beauty dish reflector with a diffusion substance. It was placed on my left-hand side. The beauty dish was aimed at the focal point of the model’s face where it created the most significant illumination. The illumination intensity decreases towards the edges of the picture. This light was ideal for illumination of the distinctive features of the model – it would be a shame not to highlight them. 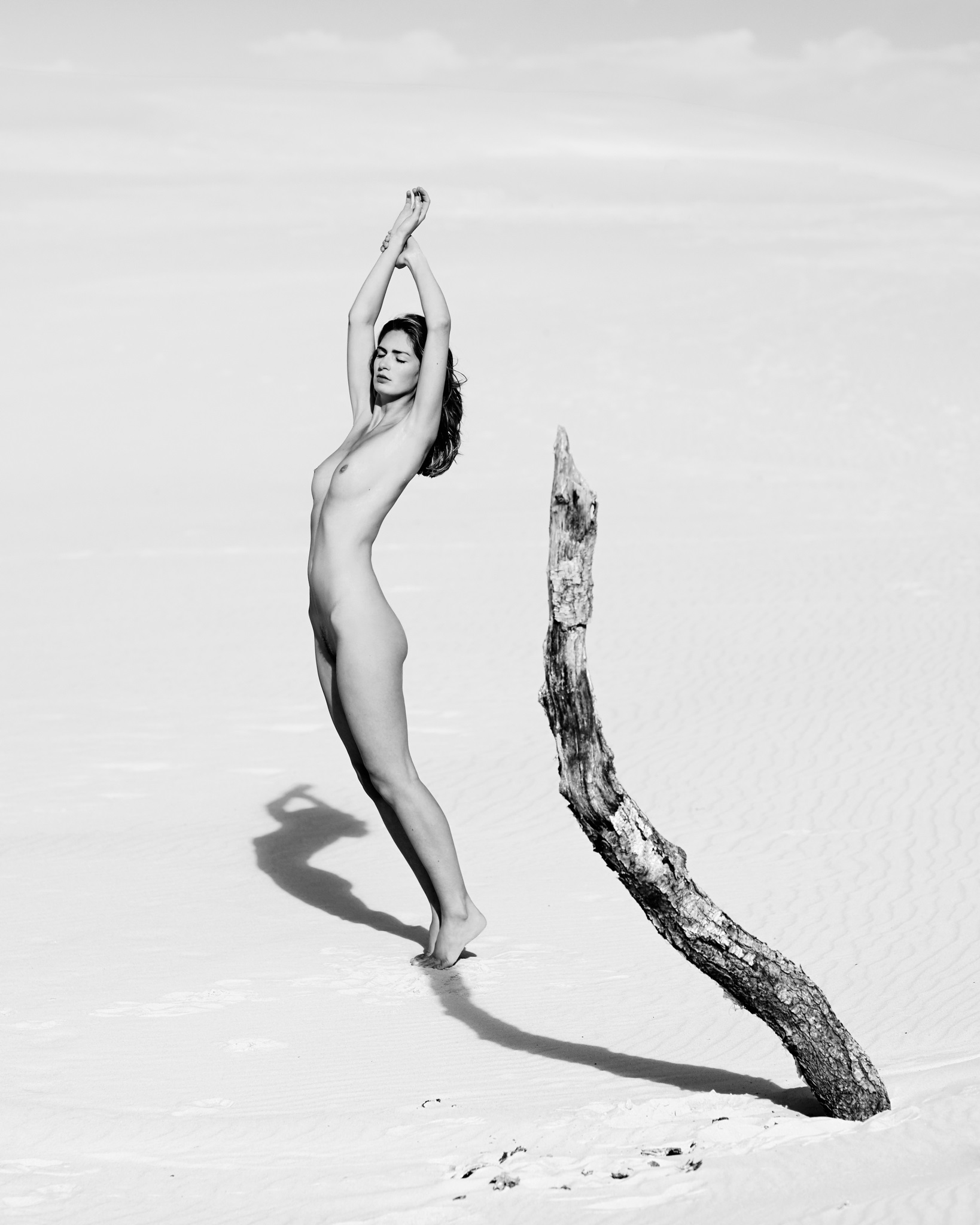 This photo was taken during a workshop at the Slowinski National Park on the Baltic coast of Poland. The location is on a sand dune next to sandy beaches. I can definitely recommend this place for photographers. However, there’s one disadvantage: the sea is not really good for swimming. Now back to the photo. There was a curved torso of a tree sticking out of the ground and somebody suggested that the model could bend in a similar way. I was also attracted to the interesting shadows and I found a place in which you could see the shadows of the two objects connecting.

I think that there should be something interesting in a photo to make people pause for a while. It should stick in the viewers’ minds and make the photographer get back to it as well. But what can we do to make photos more interesting? What helps is for example an interesting story, action, dynamics, or location. When shooting people, it can also be styling (makeup, hairstyle, clothing), capturing their emotions, or the charisma of the photographed model. Of course, we can also enhance everything by well-chosen elements of composition. Sometimes it requires a perfect preparation and a concept to make an interesting photo, sometimes you just need to be in the right place at the right time. Just like all human activities, photography is a constant learning, discovery and experimentation process. There may be some stumbling on the way but you keep earning more and more experience. 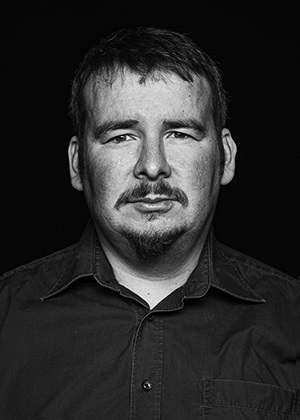 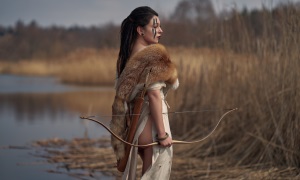 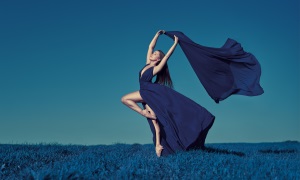 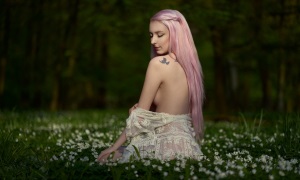 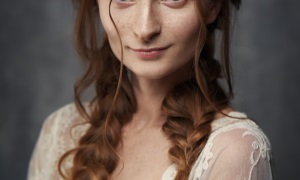 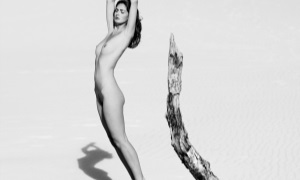 We have more than 30 years of experience
Use the advisory service of our specialists
Choose from 4 248 items in our e-shop.
We are able to ensure service until the end of the lifetime of the product.